In an article featured in racquetmanager.com, (link here), we highlighted the rule on reaching over the net.  Apparently Murray knows the rule while Djokovic and the Chair Umpire do not.

Perhaps it was not quite up there with Andre Marriner’s dismissal of the wrong Arsenal player, but we saw an atrocious piece of umpiring in Andy Murray’s match against Novak Djokovic on Wednesday night. The ensuing controversy helped to set Djokovic on the way to a 7-5, 6-3 win.

Players are only supposed to reach over the net to shake hands. Yet when Murray sent up a shallow lob on the first point of the 11th game, Djokovic stretched his whole racket – hand and all – forward over the net to tap the ball away at an acute angle. Bizarrely, umpire Damian Steiner sat there and said nothing at all.

Admittedly, this was only one point out of the 126 that were contested in Miami. But the beauty of tennis is that some points are more equal than others. In this instance, Murray was serving at 5-6 to send a taut and compelling first set into a tie-break.

Play stopped for a couple of minutes while he argued with Steiner, and even called Djokovic forward to ask for a confession. Then, with Murray now under pressure at 0-15, he proceeded to cough up three unforced errors to be broken to love and concede the first set. His head was still spinning from Steiner’s howler.

The call was clearly significant, especially as 15 of the previous 19 meetings between these players had gone to the man who won the first set.

Footage from the broadcasters shows a manically grinning Murray saying: “You’re having a laugh, man, you can see it on the replay! Even Novak said his racket was over the net!” To which Steiner replied: “Over the net is fine” — in other words, the racket can cross the line before or after contact — “but you cannot hit the ball on the other side.” Steiner also explained that he thought Djokovic had hit the ball “on top of the net” rather than on the far side. He was only wrong by a couple of feet.

Murray was measured afterwards: “It maybe had a slight bearing on that game. If that was at one-all in the first set, I might not even have looked at it, but at that stage it’s something you obviously have a look at when they show the replays. It doesn’t really help things.”

Wednesday’s exit will have a real impact on Murray’s position on the rankings ladder. He was defending the title here, and his failure to reach the semi-finals will knock him down two places to No 8.

But there were positives too. His groundstrokes were crisp and his serve was penetrating — at least until the final 10 minutes or so, when he lost focus again and surrendered 12 of the last 13 points. Murray has improved with each match this week, with Wednesday’s performance surely going down as the best he had produced since the last time he faced Djokovic. And that previous meeting had come in the Wimbledon final last July, two months before Murray underwent back surgery.

“If someone had told me after the surgery this is where I would be going into April, it’s not too far from where I’d want to be,” Murray said. “I played more tournaments to start the year than I have in the last few years and have come through pretty good.

“I’m playing top-10 tennis, but maybe not top-five or top-four tennis. That’s where I want to be by the time the French Open comes around, so hopefully in the next couple of months I will improve.”

With Ivan Lendl back in his player’s box as a supporter, Murray was exhibiting the revised, increasingly positive gameplan that Lendl has helped him to deliver in the big matches. At one point, he rushed the net behind a service return — a bold tactic that seemed to make an impact, as Djokovic sent down two double-faults.

Yet Murray still seems to lack the mental fortitude to sustain that level over two or three hours, which is where Djokovic, Rafael Nadal — and now once again Roger Federer — have stepped away from the pack.

His back also continues to niggle from time to time. On Wednesday, on an unusually brisk and breezy day in Miami, he wore an undershirt to stop it stiffening up in the chill. Yet he is getting closer, step by step, to the form we saw last season. Of course he would like to reach that point by Roland Garros, but Wimbledon fortnight will be a more critical goal.

What the rule says : For Novak Djokovic — and anyone else who may be unsure of why Andy Murray was so aggrieved …

Rule 24 (h) makes the issue clear. “The point is lost,” it states, “if the player hits the ball before it has passed the net.”

Do you how to score a match when the 2 hour time is up ? 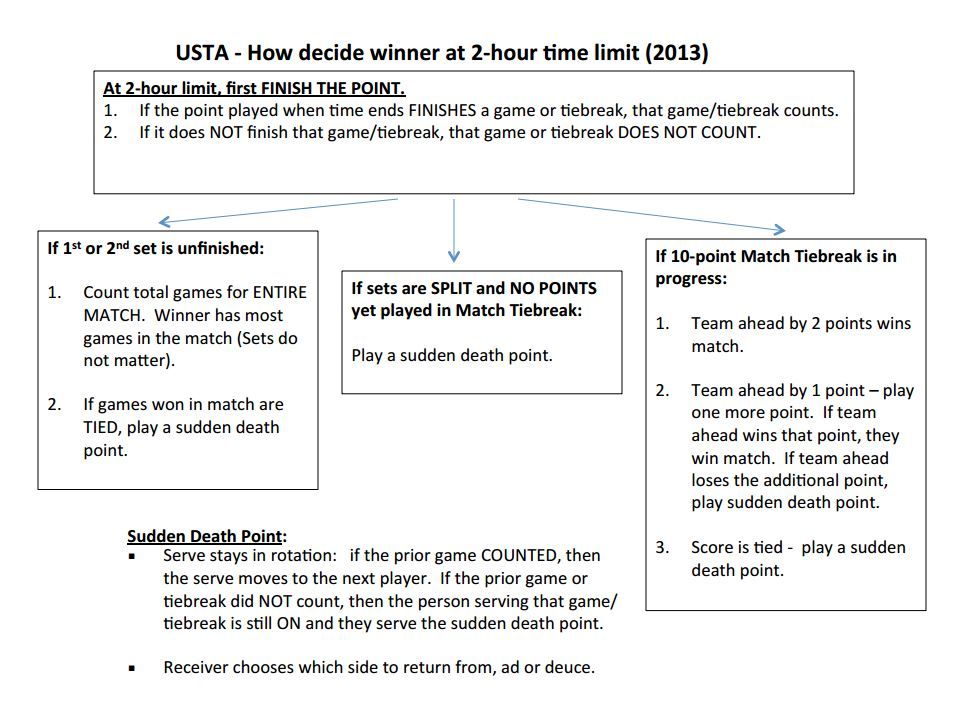 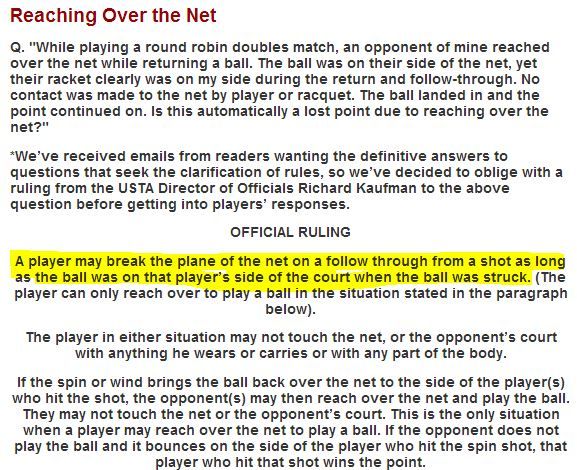 Q. Can the server call his own let service? I heard my serve hit the net, but my partner and the opponents did not call it.

A. Yes. Any player (the server, returner or the respective doubles partners) may call service lets.